Behaviour and mental health: towards a new approach

There has been much debate on the issue of behaviour, discipline, and pupils’ return to education in recent months. The Government has made several announcements setting out a new behaviour in schools agenda for this coming year. This includes the roll out of a three-year behaviour hubs programme, revisions to guidance on exclusions and the launch of a National Behaviour Survey.

Alongside these announcements, there has been a return to the rhetoric of discipline, with terminology such as ‘zero-tolerance’, ‘discipline regime’, ‘sanctions’ and ‘expulsions’ being used by politicians and policymakers. This approach has been challenged by many in the children’s sector and the use of the term expulsion to describe permanent exclusion has since been dropped by the Department for Education (DfE). Nevertheless, we remain worried about the harmful effects this rhetoric and approach will have on children and young people, particularly for those for whom poor behaviour is a sign of distress or trauma.

In response to the Government’s announcements, we recently signed a joint letter coordinated by the Children and Young People’s Mental Health Coalition to the Education Secretary, Gavin Williamson MP. The letter shares concerns from members about taking a punitive approach to behaviour, and the risks this presents to children’s wellbeing and learning outcomes. Children and young people have faced enormous disruption to their lives over the last year, including to their education. We know that the pandemic has exacerbated existing inequalities and has exposed some groups to significant challenges including poverty, bereavement and abuse.

There is a risk that the Government’s approach to behaviour will jeopardise pupils’ reintegration back into education and lead to a rise in school exclusions.

What does the evidence tell us?

The links between behaviour and mental health are often poorly understood. While it’s true that not all misbehaviour is a sign of an unmet need, as explored recently by Mary Meredith, professionals should exercise curiosity about what a child might be trying to communicate. The Department for Education’s own guidance on Mental Health and Behaviour in Schools acknowledges this, and encourages schools to examine the underlying factors that may contribute to misbehaviour such as learning disabilities, child protection concerns and mental health problems. 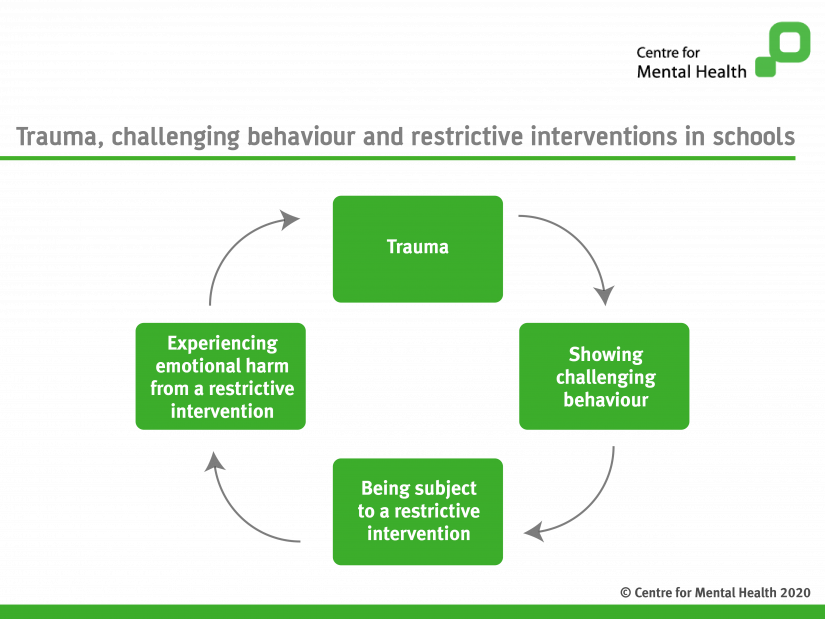 The use of exclusions is among one of the most common and contentious forms of restrictive intervention in schools. There has been a growing focus on school exclusions by governments over the past few decades, with a view to reducing rates and tackling the disparities between different groups. Yet despite this focus, the levels of fixed-term exclusions in English schools reached a record high in 2018-2019. In the five years up to 2020, there has also been a 60% rise in the numbers of pupils issued a permanent exclusion. Persistent disruptive behaviour remains the most commonly cited reason for both fixed and permanent exclusions. Persistent behavioural problems may also be a sign of conduct disorder, in itself a psychiatric diagnosis. Evidence reviewed by the University of York suggests that the UK has a school exclusion rate that is ten times higher than that of any other country in Europe – we need to understand why this is the case.

This steep rise in exclusions prompted the Government to commission a review led by Edward Timpson, published in 2019. The review examined data on school exclusions and confirmed that some groups of children and young people, including those on Free School Meals, those with Special Educational Needs and Disabilities, Black pupils and those from Gypsy, Roma and Traveller backgrounds were much more likely to be excluded than their peers. A recent report on school exclusions published by the RSA rightly notes that the “school exclusions issue is not just one of total numbers; it’s a question of social justice.” The disproportionate exclusion of particular groups of children and young people should set off alarm bells for all those concerned with equity in both education and health.

Like other forms of restrictive practice, exclusions can reinforce trauma and contribute to a pupil’s feelings of rejection and alienation. A recent study by the National Education Union and University College London highlighted the close links between behaviour and belonging. According to the report, children from disadvantaged backgrounds are twice as likely to say don’t belong and four times more likely to be excluded compared to their more advantaged peers.

Evidence suggests that as pupils continue to reintegrate back into school after the pandemic, there is an increased risk of school exclusions. A recent paper by No More Exclusions, an abolitionist grassroots movement in education, found that despite the initial drop in exclusion rates during lockdown, rates appear to be rising again based on a sample of 73 schools.

There are alternatives to punitive approaches

It’s important to recognise that there are effective alternative responses to behaviour that don’t rely on punitive or zero-tolerance principles. Instead, a report by the Education Endowment Fund calls on education leaders to take proactive steps to support teachers to better understand their pupils and provided targeted support. For example, teachers should be supported to spend time on building trusted relationships with individual pupils. School leaders should also offer staff training on specific strategies to support pupils who present with challenging behaviour. The study on belonging by UCL and the NEU also highlights practical examples that promote belonging, mental health and help minimise the use of punitive approaches – such as using an international day to celebrate students and reinforce relationships with families from diverse backgrounds. It is important to note that schools and colleges require sufficient funding and resources to put these measures in place. Yet despite this, the announcement made this week to fund a schools ‘catch up’ support package falls significantly short of what is needed to support educational recovery and wellbeing.

As pupils reintegrate back into education, the Government must ensure that wellbeing is at the heart of recovery. It is crucial that it invests in trauma-informed support in schools, including bereavement and targeted support for those facing inequality. We have also been calling for the introduction of a temporary pause on school exclusions during and in the aftermath of the pandemic to prevent pupils facing further disruption to their learning.

Schools can reduce exclusions and the use of other punitive approaches in the longer term by promoting belonging, wellbeing and implementing a whole school and college approach to mental health. Mental Health Support Teams and designated senior leads for mental health should work closely with schools to deliver this and support those pupils at risk of exclusions.