From prison to work 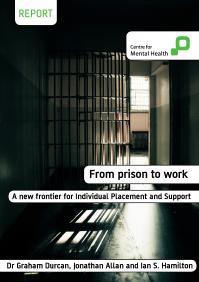 A new frontier for Individual Placement and Support

Thousands of people leave prison every year. However, the majority receive little support on release, despite the fact that providing mental health support for people leaving prison alongside practical help with housing, finances and other basic needs can be essential elements of effective rehabilitation.

This project trialled Individual Placement and Support (a evidence-based model of employment support) with a population it had not been tested on before: people with mental health problems leaving prison.

Working in the West Midlands, the Centre and partners conducted a feasibility study of IPS across eight prisons. In total, 23 of the 61 people who engaged both during and after their time in prison were supported into employment. This was in the face of some major challenges, including the biggest upheaval in probation services for many decades, Transforming Rehabilitation.

We also observed a concerning lack of mental health support for a group with such complex needs. In addition, the project often operated in a vacuum of other support, meaning that before intensive employment support could be provided, the project was required to focus on more immediate needs such as housing and benefits.

From Prison to Work finds that the Individual Placement and Support approach can be adapted successfully to support prisoners to get work when they are released. It calls on the Government to invest in a larger scale trial of IPS for former prisoners and to reform existing employment services in the criminal justice system.

From prison to work PDF

Better help needed from prison to work, says Centre for Mental Health report
What is IPS?
Employment after prison