Over 30,000 people were held in UK immigration detention in the year to March 2016, many of whom have experienced torture, trauma and oppression.

Following a report which highlighted the poor mental wellbeing experienced by many detainees, Centre for Mental Health was commissioned by NHS England to conduct a rapid mental health needs assessment across Immigration Removal Centres (IRCs) in England.

10 IRCs were assessed as part of the Centre’s needs analysis, to explore the wellbeing of detainees, the services in place and the perspectives of people working with those detained.

Immigration Removal Centres in England finds that people detained in IRCs often face significant challenges to their mental health. The report finds that levels of distress, problems with living conditions and lack of both certainty and liberty, all had a significant impact on the wellbeing of those detained.

My relatives wanted to kill me… I fled, but [was] sold into the sex industry. I was trafficked to Europe… I was tortured, raped and had no access to medical [help]… when I reached the UK I fled these people and then I was on the streets

It was found that the NHS and the Home Office are working in partnership to improve the support available in IRCs, for example by implementing a ‘stepped care’ model of mental health support and carefully monitoring progress.

The report finds some positive examples of services, such as psychological therapy, wellbeing groups and the support provided by chaplains. But it also finds that most detainees felt that they were not listened to, not taken seriously, or treated as if they were lying.

I can tell you I was hit with bars and knives… I can say that family members were killed and that my sister was raped, but if I was to give more detail, then I have to think about it and I can’t get it out of my head

Similarly, some staff reported that it was easy to become assimilated into a culture which disbelieved detainees. In addition, mental health care staff face significant challenges working in IRCs where people may be removed at short notice and face high levels of uncertainty about their future. 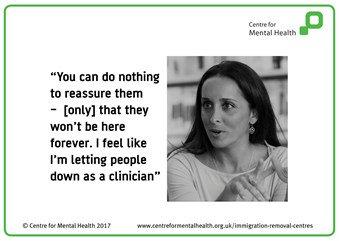 Immigration Removal Centres highlights the multifaceted wellbeing needs of people in immigration detention, and makes recommendations to address this. It calls for greater lengths to ensure that those with a marked vulnerability are not detained; mental health awareness training for all IRC staff; 24/7 access to crisis care; and greater provision of alternative support such as peer support and relaxation groups.