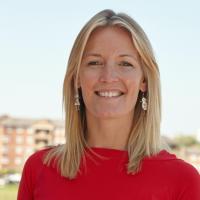 Lady Edwina Grosvenor is a prison philanthropist. Since graduating in 2005 from Northumbria University where she studied Criminology and Sociology, she has developed a career in prison reform. Her work has taken her all over the UK and around the world, visiting different models of criminal justice and witnessing first hand examples of best – and worst - prison practice.

Between 2007-2011 Edwina supported and advised the Bishop for Prisons, James Jones in the House of Lords. Edwina has sat on the Women’s Advisory Board for Female Offenders under The Secretary of State for Justice, to advise the Government and oversee the reforms to the female prison estate.

Edwina is the founder and Chair of One Small Thing, an organisation that works with prisoners and staff in both male and female prisons and in the community. One Small Thing was set up to encourage a better understanding of trauma within the prison system and how to deal most effectively with those who have experienced it.

She is a founding investor and Ambassador of the Clink Restaurant chain, which trains prisoners for work in the catering industry.

She is married to the historian and broadcaster Dan Snow. They live in Hampshire with their three young children, two pigs, quite a few bees, a large vegetable patch and a baker’s dozen of guinea fowl.